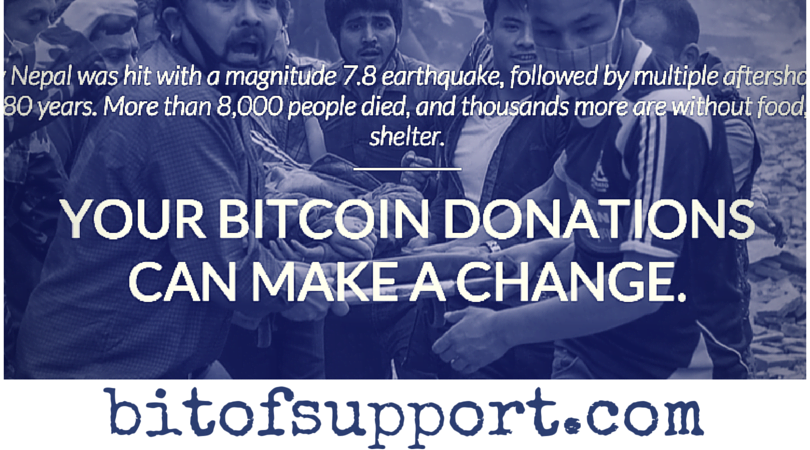 It has been about a month since the “Bit of Support” campaign went live. The campaign available on www.BitofSupport.com is a socially conscious initiative by NewsBTC, KarmaSnap and igot towards the victims of the recent earthquakes in Nepal. In the past few days, the campaign on BitoSupport.com has proven that the Bitcoin community cares deeply. To stand proof to this overly generic claim is the response received by BitofSupport; the campaign has raised about 1 BTC so far in less than 30 days.

1 BTC, which converts to roughly around $230 in fiat currency doesn’t look like a lot of money. However, BitofSupport and other Bitcoin fundraising campaigns for rehabilitating the Nepal Earthquake victims have proven a few things:

Taking BitofSupport as an example, Bitcoin donations made on BitofSupport is sent to a Bitcoin wallet/account at the address – 1CvvYfHWndY3UJGSTFQmZsQjsLv9gZiBx8

It is important to note that anyone in the world who can type a web address in the browsers’ address bar can check the total amount of Bitcoin donations that have been collected. This level of transparency can’t be achieved with fiat currency based payment systems.

If this was done with fiat currency, the responsibility of disclosing the amount of donations raised would rest with NewsBTC, KarmaSnap and igot. But this is a whole new level of Charity. Bitcoin may be anonymous, but it is still transparent. As oxymoronic it might sound, take a few moments to think about it and we might just be looking at a revolutionary way, since money was invented, to raise donations for charitable causes and disaster relief.

Bitcoin is known for its speed and ease of transactions. Also, it happens to be the most economical way of sending funds across geographical boundaries. These qualities makes Bitcoin the ideal system suitable for rapid deployment during natural calamities and emergencies. It can help the affected region restore its financial network at times of crisis  and also to raise funds for the affected (the fundraising process can be set up within a few hours).

Bitcoin community is spread across the world, with Blockchain as one thing that’s binding everyone together. When the whole community gets involved, it is as good as the whole world is standing up for a cause.

If you want to dig into the details of donations raised so far on BitofSupport, just copy the wallet key, paste it inside the search bar on sites like Merkle.io or Blockchain.info. You will  find the complete list of transactions so far.

Tags: bitcoinbitofsupportblockchainblockchain.infodonationsIgotkarmasnapMerkle.ioNepalNewsnewsbtcOpinionOther
TweetShare
BitStarz Player Lands $2,459,124 Record Win! Could you be next big winner? Win up to $1,000,000 in One Spin at CryptoSlots