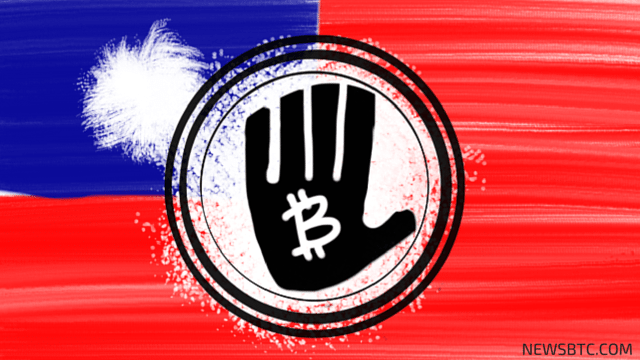 Last year the Taiwanese central bank issued a warning stating that bitcoin was a highly speculative virtual asset and lacked a mechanism to protect its transactions. Now, claims of illegal activities being conducted with aid of the virtual currency were taken to court by the Taiwanese Financial Supervisory Commission.

It all began when a Hong Kong tycoon was kidnapped and held hostage for more than a month by a gang in Taiwan. The gang was demanding a ransom to be paid in bitcoin.

Today, the Chairman Tseng Ming-chung, a representative of the Financial Supervisory Commission was questioned at the legislative hearing; whether or not the virtual currency could be used in Taiwan. He immediately stated that this new digital currency posed big threats on the island’s financial economy and declared the use of bitcoin an illegal act in Taiwan. He stated that Bitcoin was illegal and pledged that the Financial Supervisory Commission was already working with the country’s police and central bank to crack down any illegal activity.

Until now, there was no legal claim against the digital currency, but Tseng said that the Financial Supervisory Commission was working on a regulatory bill and would be publishing a statement jointly with the central bank to inform other countries of such regulations as well. The FSC is said to be releasing this new regulatory bill in the near future.

Bitcoin appeared in late 2009 as a new way of electronically sending money without the need of third parties getting involved. It’s a decentralized currency and it is not controlled by any banking authority or country. Bitcoin has been gaining momentum in many countries, but some are unfriendly towards the virtual currency. After, Iceland, Ecuador and Costa Rica, Taiwan becomes the 4th country to officially declare to be hostile against bitcoin.