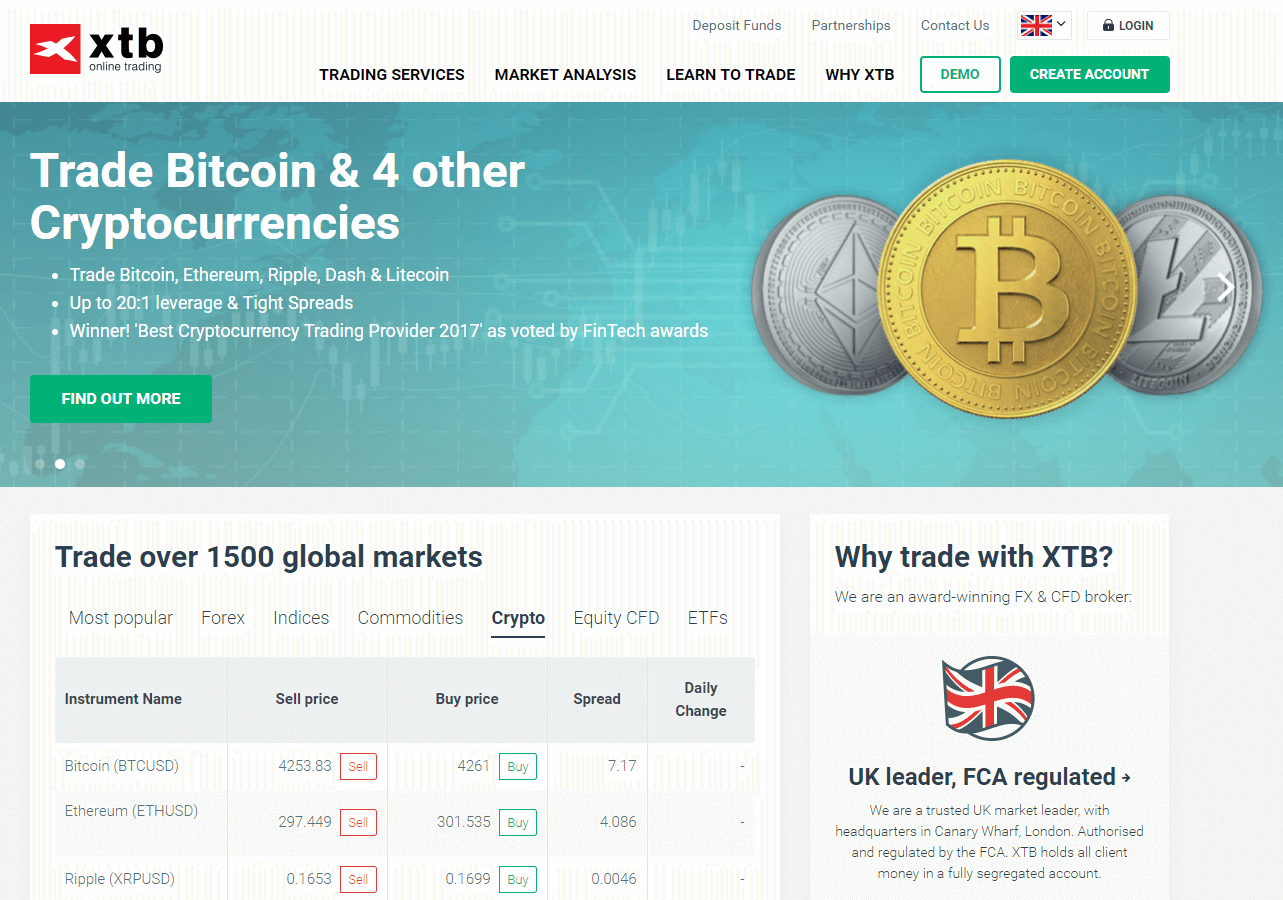 The conference takes place on Saturday 19th August at Canary Wharf, London UK  in the iconic One Canada Square building on Level 39. Travelling to the venue is easy via Tube (Canary Wharf), DLR (Canary Wharf) or car. You must register using the sign up form on XTB’s Conference page here to reserve a seat. Registration is FREE.

XTB is a leading UK trading provider and recently won Best Cryptocurrency Provider 2017 by FinTech Awards. As a group, XTB offers Cryptocurrency CFD trading  for thousands of clients all around the world and given the huge interest in the digital currency revolution, they’ve put together the first ever London Trading Conference specifically on Cryptocurrency Trading.

The main goal of the conference is to help provide all attendees with valuable insights about investing in or trading Cryptocurrencies such as Bitcoin, Ethereum, Ripple, Dash and Litecoin.

2017 has seen Cryptocurrencies experience explosive growth. Once considered something of a lottery ticket, several of the digital currencies have become legitimate assets for trading portfolios. But what exactly are Cryptocurrencies, how do they work, and how could you trade them? Find out with this special edition Masterclass and learn how to take advantage of the volatility.

What will attendees learn?

How to trade Cryptocurrency CFDs

There’s a huge buzz over Cryptocurrencies but how can you actually trade them? We’ve got a range of experts to teach you about Cryptocurrencies – including Ashraf Laidi – to detail their strategies and risk management techniques.

Back in May, Bitcoin hit $2,000 and people were claiming that the bubble would burst. A month later prices reached $3,000. Since then, Bitcoin traded back below $2,000 and has now rallied to trade above $4,000. So how much further could the rally really go – or is a crash still on the horizon?

What could be the next breakout star Cryptocurrency?

Two years ago everyone was talking about Bitcoin. Now there’s more than 100 Cryptocurrencies. What could be the new breakout star and how might the crypto space grow?

Who are the expert speakers?

Expert Speakers at the Conference include:

Ashraf Laidi, CEO and founder of Intermarket Strategy: Ashraf is an independent strategist, trader and founder of Intermarket Strategy Ltd and author of “Currency Trading & Intermarket Analysis”. He focuses on foreign exchange and global macro developments pertaining to central bank policies, sovereign debt and intermarket dynamics. His insights on currencies and commodities won him several #1 rankings with FXWeek and Reuters, whilst his highly engaging style makes him a very popular speaker.

Phil heads up the Group’s Commodities Training business working with private retail and institutional clients across the world.

David Cheetham, Chief Market Analyst at XTB: David Cheetham is the Chief Market Analyst at XTB UK who began his career trading Brent futures on a prop desk. David took the job after completing an MSc in Banking and Finance at Newcastle University. After initially trading Brent futures, he quickly expanded to cover WTI and some fixed income markets. After two years he branched out and started trading for himself, covering a wider range of assets including indices and FX whilst maintaining his core focus on Oil. David now has 5 years’ trading experience and actively trades most asset classes. Whilst his approach is predominantly technical, he is well aware of fundamental drivers impacting markets and uses a combination of both when selecting his trades.

How to reserve your seat ?

You must register your details on XTB’s Cryptocurrency Web site  first to reserve a seat. Due to security protocol, you won’t be allowed entrance to the event without registering first. It takes less than 30 seconds to register using XTB’s secure online form and you’ll be sent a full itinerary for the event upon registration.

XTB as a group was founded in 2002, and   Today, they have become one of the biggest stock exchange listed Forex and CFD brokerage firms in the world. Their worldwide operations cover more than 13 different countries including the UK, Poland, France, Germany and Spain. They are also authorised and regulated by several financial regulatory bodies such as BaFin, CMB, The Financial Conduct Authority and KNF.

Trading CFDs based on cryptocurrencies is extremely risky due to significant volatility and the use of leverage. Losses can exceed deposits.