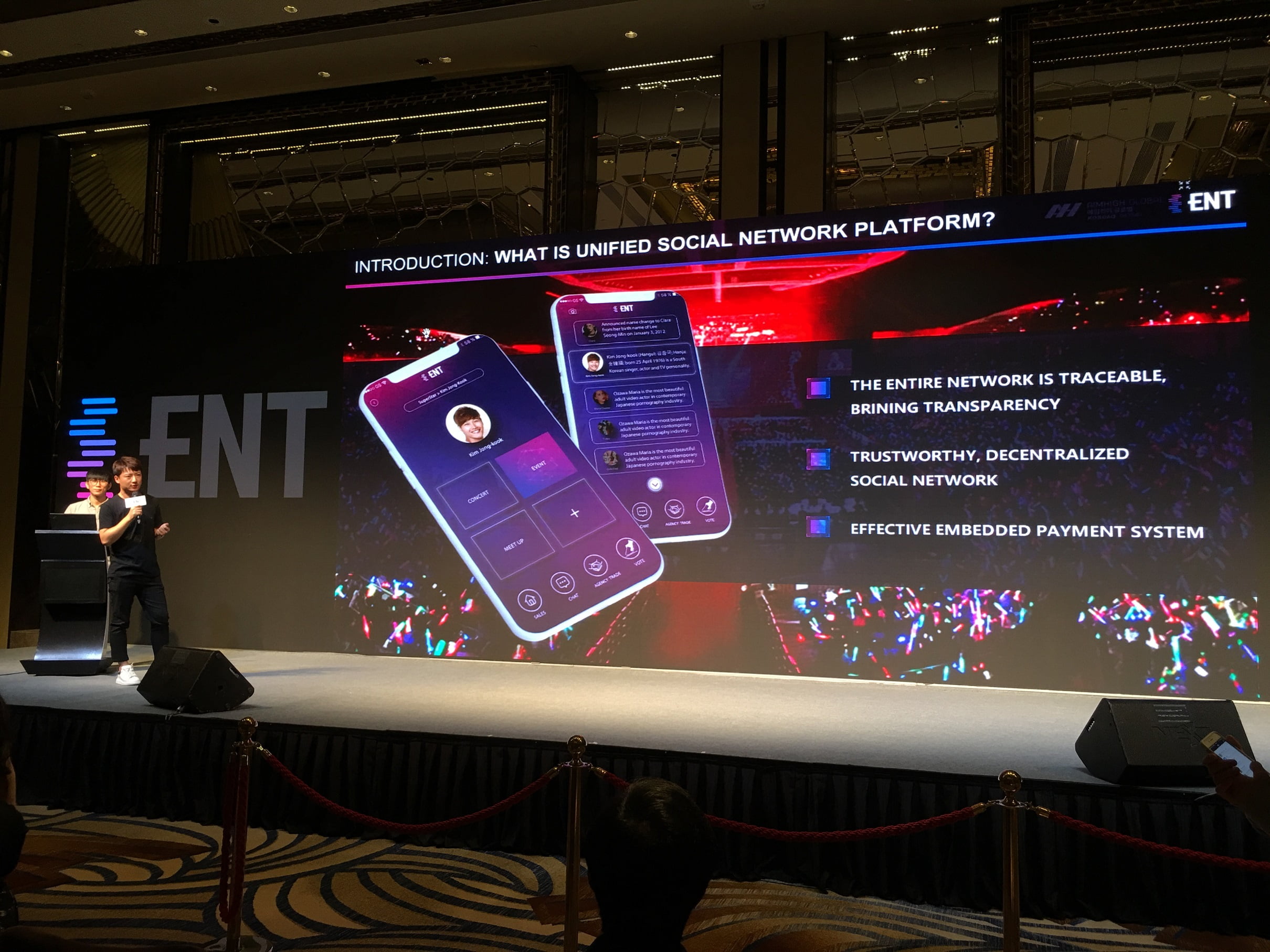 (Macao, 6 November 2017) TAEYANG, Korean superstar and one of BIGBANG’s members, hosted his World Tour WHITE NIGHT in MACAO on 21 October. ENT, a brand-new payment platform using cryptocurrency backed by Blockchain technology, is announced as a supporting partner to the TAEYANG 2017 World Tour WHITE NIGHT. It shows further recognition of ENT from mainstream entertainment enterprises after supporting G-Dragon’s concert in Europe. In the press conference, ENT announced the launch of ENT Cash, which will be a brand-new payment method to purchase concert tickets.

ENT is a world-class blockchain technology based cryptocurrency project in Korea. This project is initiated by Aimhigh Global (KOSDAQ：043580), a leading Korean listed entertainment company. Clara, popular actress and model in Korea, has already agreed to engage in the ENT ecosystem. It is expected that more world renowned celebrities will take part in the project as the ecosystem grows. Mr. Wang Xue, Chairman of Aimhigh Global, commented, “ENT Cash is well positioned to become a preferred payment method in the entertainment industry. The celebrity worshipping and its viral effect also facilitate the application of ENT.”

As a blockchain application, all the data in the ENT chain can be traced, which keeps all activities open and transparent. The cryptocurrency will first be applied to the sales of concert tickets and related merchandise. It will be subsequently integrated with smart contracts, credit systems and social networking platform. ENT will establish a full range of entertainment ecosystem, including a unified digital payment solution with ENT Cash, as well as a live-stream broadcast platform.

Capitalizing on Blockchain technology’s advantages of decentralization and distributed computing advantages, ENT can close the loophole of the existing currency and payment system, which will in turn create payment needs by tapping into the entertainment business.

Celebrities can issue their own ENT Cash that supports the sales of all entertainment related goods, such as concert tickets, music albums and celebrities’ performance fees. The Smart contract platform supports ENT Cash to l be used as an exclusive payment method for the celebrity’s commercial activities. The social networking platform, embedded with payments function, is transparent and trustworthy as it is traceable and decentralized.

As the technical support partner for ENT, INK will utilize Blockchain technology to maximize the advantages of ENT Cash by developing high quality features. ENT will also open its source code, so that more engineers can be involved in the development and maintenance of the code.

Hcash Foundation, the organization behind Australia’s first public blockchain project, also announced to provide technical support to ENT. Hcash has technical advantages and its digital currency project is a breakthrough in cryptocurrency technology, which also offers specific application scenarios. Hcash enabled integrated access to Alipay and WeChat pay in many shopping malls in Australia and facilitated loan management with digital assets such as collaterals.

ENT is seeking further collaboration opportunities across the global entertainment industry, including concert ticket payment clearing and settlement with Live Nation, the world’s leading concert production house. Live Nation organizes numerous superstars’ performances and concerts of with a huge fan base. It is also a key partner of renowned entertainment companies in Korea.

Following the continuous development of the entertainment industry, its growth prospects is promising. According to Live Nation’s Q2 2017 financial report, the company has already launched more than 7,000 live shows for 24 million music fans so far. The revenue of this sector increased by 34% y-o-y, and operating profit reached US$ 38 million. ENT will continue to work with Live Nation on its upcoming shows by developing an innovative payment solution.