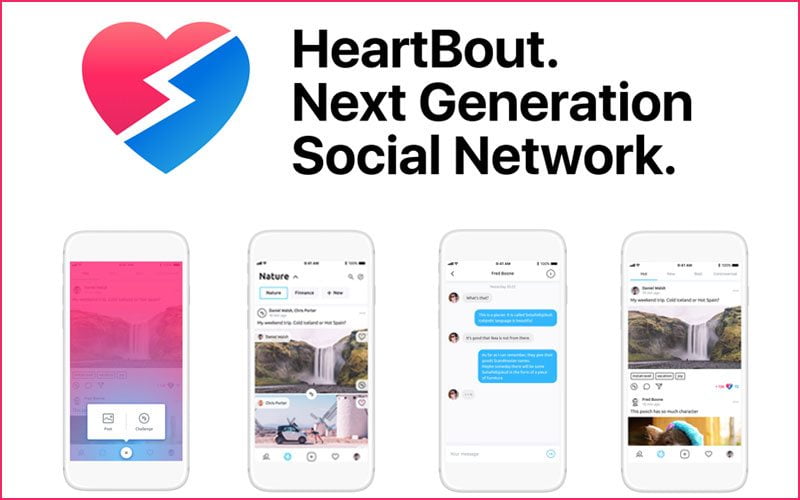 Today it is obvious that there is a worldwide growth in the comprehensive popularity of social networks among users around the world. As a consequence, the time that people spend in social networks during the day, is constantly growing. Have you ever wondered how much time you devote to social networks? An average user spends about two hours a day on social networks, which is equivalent to five years and four months over a lifetime. Quite a significant number! How to make it so that the user would spend this time with the benefit and interest for himself, showing maximum activity, and turn the social network into an effective large-scale platform for advertisers? The HeartBout project will answer this question.

HeartBout is a social network of the new generation with a decentralized reward system based on a blockchain technology. HeartBout is not an ordinary social network, but a kind of “forward step” in this area, because the user’s activity here is no longer limited to the usual “likes”. Users directly take a part in the creation of the content and get the reward for this in the form of HBC cryptocurrency. The more often people use HeartBout social network, the more they can get HBC. Thus, the idea of the HeartBout’s creators is to monetize the user’s activity for publication, voting or comment. In addition, they plan to ensure the issue of HBC tokens with the advertising capabilities of the social network.

With the help of “hot hearts”, the so-called “likes”, and “cold hearts”, a kind of “dislikes”, users of the HeartBout social network assess its content. The social network contains the feed, which allows the user to create publications and leave comments, assess publications and comments with “hot” or “cold” heart. The content in HeartBout, including publications and comments, is filtered by categories “hot”, “new”, “best”, “not sure”. The category that a publication or comment is put into depends on the user reaction to it, i.e. the number of “hot ” and “cold ” hearts. In addition, the user can independently create categories by interests in his feed and fill them with the desired tags. The user’s profile will reflect all the necessary information about him, including his subscriptions and subscribers, the number of HBC tokens he holds. Unlike other social networks, HeartBout will allow users to issue a Challenge for another person having specified a rate in HBS tokens, due to which publication will compete with the post of the user to whom the Challenge was thrown. Other users will vote for the post they like. As a result, the winner of the Challenge gets his/her rate and the opponent’s money excluding the system fee. The social network will contain group chats that will allow you to share content, issue challenges, and communicate in the HeartBout space.

It should be noted that the mechanism of work of the HeartBout social network is thought out to the smallest details. The whitepaper of the project contains mathematical formulas for calculating all the necessary indicators for the future functioning of the social network. Used technologies are also exhaustively described in this document. For user’s convenience the HeartBout’s creators plan to develop both a web version and a mobile application. The Roadmap of the project contains clearly planned actions for the implementation of all plans.

About HBC tokens and its use

Tokens are issued daily, once 24 hours, between 10.00 pm GMT and 02:00 am GMT, strictly according to the predetermined formula. All tokens issued during 24 hours are distributed between authors, voters, and miners. The price of the HBC token directly depends on the success rate of the HeartBout social network, and, more precisely, from the number of unique users of the network – the more unique users there are in the system presumably the more expensive token HBC is. Considering the projected growth of the audience of the social network HeartBout, taking into account the advertising that is much cheaper in comparison with competitors and the limited issuance of HBC tokens, the creators of the project with a fairly high degree of reliability predict the growth of the HBC token’s price at the market.

Details of the HeartBout pre-ICO and ICO

During the HeartBout’s crowdsale, only 50 000 785 HBC tokens will be available for sale, of which 10 217 279 are planned to be sold for the pre-ICO period and 39 783 506 for the ICO period. The goal of the initial offering of HBC tokens is to attract 6442 ETH. The price of the token, regardless of the stage of the sale, is $0.051. The minimum purchase amount is 100 HBC. Accepted cryptocurrency for payment is Ether. The token is based on the ERC20 standard.

Thus, the earlier the investor participates in the project’s crowdsale, the more favorable conditions for the purchase of HBC tokens he receives. The HeartBout’s creators expect the growth of 1 HBC from a selling price of $0.051 (without a discount) on ICO to the price of $5,1 (growth on 10 000%) in 7 months after the launch of the social network Heart Bout. This fact ensures the token attractiveness for purchase on ICO. The forecast of the token’s growth is graphically reflected in the Whitepaper.

More information about the project, about ongoing pre-ICO and planned ICO, as well as the Whitepaper, you can find on the official HeartBout’s website, or on the pages of the project in all popular social networks.

JOIN THE HEARTBOUT PRE-ICO NOW WITH MAXIMUM BONUS OF 35% DISCOUNT FROM THE TOKEN’S PRICE!