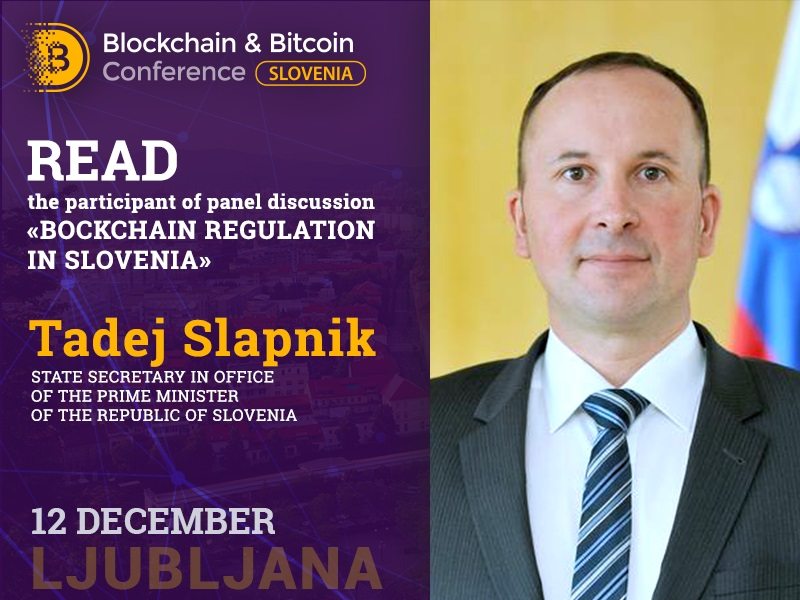 Tadej Slapnik: Slovenia will actively participate in the development of European blockchain environment

Tadej Slapnik, the State Secretary in the Office of the Prime Minister of the Republic of Slovenia, is one of the developers of the national blockchain strategy. He is convinced that soon blockchain will be introduced everywhere in Europe; that it will have a positive impact on its social sector, resulting in the strengthening of the European and global economy as a whole. That is why Slovenia, according to the expert, seeks to master the new technology as soon as possible. In an interview to the press office of Blockchain & Bitcoin Conference Slovenia, the politician spoke about the changes that the blockchain implementation could bring to Europe, and the specific steps that are being taken in Slovenia to study and implement blockchain.

BCS: The discussion topic is “Blockchain Regulation in Slovenia”. Being a Slovenian representative of GECES, could you tell us which documents regulate blockchain development in Europe now, and which changes legislation can face in this field in the future?

T.S.: Blockchain development is not yet regulated in Europe (on European level) as there are certain areas that are identified as necessary to be modified to the extent that would enable to use blockchain technology and the distributed economy model in horizontal and vertical pillars, as well. There are some cases of regulated certain areas in some countries, but there is no regulation for The Single European Market. To find the regulatory solutions, European Commission is establishing The Blockchain Observatory and Slovenia will be coordinating the preparation of “case law” for blockchain within expert working groups.

To ensure legality and legal certainty of the implementation of blockchain technology and distributed economy, there are identified four most important areas relevant for the development of blockchain technology and its use in the distributed economy system or model: taxation regulation (and the treatment of initial investment as investment or as revenue and define the taxation of different issues); data protection regulation (in the light of the fact that GDPR is coming into force in May 2018), money anti-laundry regulation (to ensure the compliance with European directive coming into force in 2018) and regulation of securitization (to enable an issuance of tokens, that should not be treated like securities) and national central bank policy (especially in the European member states, using Euro as currency).

GECES prepared The GECES Report with the subtitle “Call for Action” in 2016, in which sharing and circular economy are two of four future development areas. Implementing blockchain technology as a tool, it can enable positive social impact using blockchain technology and positive social impact derived from distributed economy model or system, bringing higher efficiency and wealth for the European and world economy as a whole.

BCS: Recently, the Prime Minister Miro Cerar has stated that Slovenia intends to become a European leader in the field of blockchain technologies and that a relevant infrastructure is being developed now. Which specific actions are taken to develop blockchain in Slovenia?

T.S.: First, the Blockchain ecosystem has been established. It has three main pillars: legal/policy pillar, supporting environment for development of blockchain and business pillar with the developed blockchain companies and blockchain startup companies in it. Three main pillars are implemented through Blockchain Think Tank initiative on the national level (as a part of Digital Slovenia Initiative, through the cooperation of the Government, Academia and research institutes, businesses and projects), Noordung Blockchain Hub EU (the blockchain hub to support the development of business ideas and projects to the market or for the market and to support the government in the policy creation through business cases for businesses and projects based on blockchain), the business pillar is represented by the strongest blockchain companies on the world level , together with the blockchain startups and initiatives to become startups with well-developed business models.

Next steps would be oriented into strengthening the business – legal and financial environment together with the development of strong community based on blockchain technology and distributed economy, having in mind positive social and economic impacts that the use of this technology can have on the society as a whole.

BCS: To what extent does the all-European blockchain development program influence Slovenia? Is the growth of blockchain in the country a part of the joint project of the EU countries or a local initiative?

T.S.: European Blockchain development program has strong influence on Slovenia, but it is better to say that the influence is mutual. Slovenia as one of the most advanced countries in developing blockchain based government and businesses will through the cooperation in the EU Blockchain observatory and through the establishment of Noordung Blockchain Hub EU actively participate in co-creation of the European blockchain and policy environment, first through the consultancy and advisory activities on legal and other matters, and then through the case law also in implementation of that regulation and policy on EU level.

BCS: The Prime Minister Miro Cerar also promised that the government would organize events where participants would compete to implement and regulate blockchain in the country. Which prospects will it open for development companies?

T.S.: The Government will organize the different events promoting blockchain technology and distributed economy and wider and better use and implementation of it in certain number of verticals, including the government level. There will be meet-ups organized in various regions in Slovenia, EU and other parts of Europe (Western Balkans, Turkey), but also outside Europe (in USA, Asia, UAE, etc.). There will be Academies, supported by the government to increase and share knowledge of blockchain technology and its use in efficient and transparent manner, there will also be hackathons supported by the government which can open additional prospects for the regulation of certain areas relevant for blockchain in the legislation, regulation and implementation of blockchain technology and distributed economy model in Slovenia and abroad.

BCS: From the standpoint of social economy, which benefits can the growth of blockchain technologies bring to the country at the state level?

T.S.: From the standpoint of social economy there can be many important benefits of blockchain technology. First, transparency and democracy are the principles, followed by blockchain technology and social economy as well. Optimization of the processes and business models will enable the creation of additional assets for the future development as well as the decreasing of inequality inherent in the existing economic system. The blockchain system will eliminate negative externalities (especially the asymmetry of information) which can decrease or eliminate the existing costs connected to the asymmetries and together with the introduction ofpeer-to-peerr and community based approach it will also decrease the costs of intermediaries. Those are very important horizontal positive social impacts for the whole society, bringing the wealth of local communities, regions and the state as a whole. Legal certainty will increase savings and transparency will minimize the possibilities of abuse and elimination of positive social and economic impact.

On the other hand, it will increase the visibility and the importance of social economy in many verticals of the national economy. Energy efficiency with the use of blockchain technology can be increased with the business models using blockchain technology for direct communication and access to more clean and cheaper energy in the communities, local food production and supply will be increased with the use of blockchain technology and with higher level of certainty there will be positive social impact on health of the citizens (as clear and transparent track record will be provided with blockchain technology, food surpluses can be minimized and efficient food supply together with the minimization of transport and logistic costs can be provided), with the perspective of circular economy, the existing end products can be better used as raw materials or inputs within the same business process or in the value chain of certain industries which will enable the whole economy to have better end more efficient use of input materials and services and optimization of business processes for whole economy, and together with additional and new jobs creation it will enable the transformation of the economy to be prepared for the new industrial era).The same is expected for sharing economy, which is another important perspective for social economy. As the trust grows using blockchain technology, more and more private blockchain based models can be developed, following the principles of social economy. The government ledger will enable more efficient government services and inclusion of social economy enterprises and organizations implementing the services based on deinstitutionalized principles which will enable positive social impacts on the horizontal level.

BCS: Are there blockchain projects that are already fully functional in Slovenia at the state level?

T.S.: There are blockchain projects in Slovenia, that have a perspective to be fully functional (not yet) on the state level, but with the strong potential of certainty that can contribute to the functionality of blockchain projects on the state level. One of them is Data Fund project, recently launched by Cofound.it, project which proves that it is possible to start the blockchain based business in Europe, within the possibilities provided by existing regulation, on very sensitive area which is data protection.

Read the latest news of the cryptocurrency and blockchain world on the website of  Blockchain & Bitcoin Conference Slovenia.

Tags: conferencesloveniaSmile Expo
Tweet123Share196ShareSend
Win up to $1,000,000 in One Spin at CryptoSlots