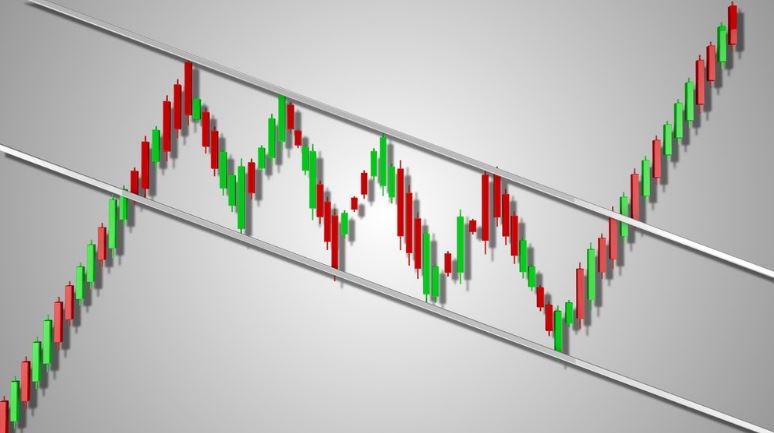 Flags and pennants look and behave similarly. Each has a large flag pole leading to consolidation. It’s the shape of the consolidation that separates flags from pennants.

Flags have a parallel, slanted channel, while pennants have a symmetrical triangle-like appearance at the top of the pole.

Targets are taken by measuring the distance of the flagpole and applying it to the point of breakout.

Bull flags are often continuation patterns. After the W-bottom reversal in the below image, a bull flag formed. The target of the formation is taken by measuring the flag pole and applying it to the breakout.

Notice how the bull flag is sloping downward. Bull flags give the impression that bears are in control with downward trending support and resistance. But when bulls finally overwhelm sellers a breakout to the upside causes stop losses to get hit, causing a strong move and flag pole in its wake.

The bearish counterpart to the bull flag, the upward sloping pattern gives bulls the impression they are in charge. When they least expected, bears pushed price below support and caused a strong breakdown, resulting in the flagpole.

The bear flag is then formed as price action consolidations for another move.

Pennants are similar to flags due to the same flagpole-like structure leading to consolidation. However, within pennants, price action converges to an apex like a triangle, rather than a channel like a flag.